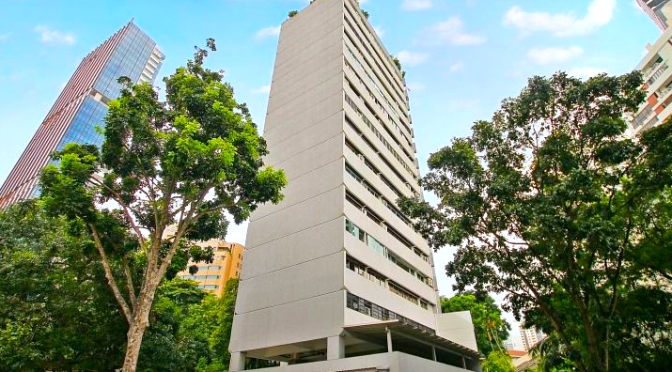 Home owners at freehold condominium Cairnhill Mansions are looking to ride the wave of collective sales as they gear up for their fifth attempt at selling their estate, according to local news media.

The estate in Cairnhill Road consists of a 61-apartment complex with a maximum gross floor area of about 172,240 sq ft, yielding potentially 140 new units in the redevelopment.

The estate’s prime address is expected to carry a premium. Not too far away at the former Zouk club address in River Valley area, a developer committed to bid at least $689.4 million for the government reserve site, triggering an URA land sale tender. https://www.ura.gov.sg/uol/media-room/news/2017/Sep/pr17-62

The Jiak Kim Street site can accommodate 525 apartments in a development up to 36 storeys, with ground floor commercial use.

In today Business Times (11 June), it was reported that even as the government adopted a cautious approach to private housing in the latest land sales programme for H2 2014 to account for the twin factors of oversupply and weaker demand, the new sites rolled out yesterday stirred excitement in the market,

The new sites were rolled out under both confirmed and reserve lists in the residential and commercial property sectors.

In particular, the strategy to accelerate the development of various growth areas as identified in the latest land-use master plan is made clear in the latest slate. For instance, the Urban Redevelopment Authority (URA) will launch the tender for a much-awaited commercial and residential development site in Holland Village in December. “The sale of the site will further enhance the existing urban village character of the area,” said the Ministry of National Development (MND). The 2.31-hectare site is estimated to yield about 580 private residences in addition to 13,500 sq m GFA of commercial space. It is being placed on the H2 confirmed list as part of the Holland Village Extension plan unveiled in Master Plan 2014. It will provide new housing options within a mixed-use development that is well connected via pedestrian linkages to surrounding transport nodes and public spaces. An existing car park that will be part of the sale site will be shut by the first half of next year to facilitate development of the sale site. Future development on the site will provide parking lots to meet the demand in the area. In the meantime, an interim car park will be built to replace the public parking lots affected.

The two plots of land will be connected via a subterranean space under Sims Avenue. The sale of the larger land parcel provides greater flexibility for building design, layout and placement of uses. It will also facilitate the development of Paya Lebar Central into a commercial node, which is in line with the government’s objective of decentralising employment centres and bringing jobs closer to homes.

The earlier plot has a drain running diagonally across it, severely constraining any potential design scheme. While the additional plot to its north also has a drain running through it, the drain divides the plot into two more regular-shaped rectangular plots, which would allow a developer to put a tower on each half. Market watchers reckon that besides a minimum office component, the enlarged sale site is likely to have retail and residential elements, and possibly hotel uses too. The enlarged Paya Lebar site can generate about 167,160 square metres (nearly 1.8 million sq ft) gross floor area (GFA), compared with 86,940 sq m for the old plot. This will limit participation at its tender to big players, say market watchers.

With the focus on decentralisation, two sites for office developments in the city – a commercial site on Beach Road and a “white” site in Marina View – will take a “back seat on the reserve list. The 2.14-ha Beach Road plot, a new site that includes the former Central Police Station grounds, can generate 89,880 sq m GFA of commercial space. Meanwihile the Marina View plot, which can produce about 101,400 sq m GFA, has been on the reserve list for more than two years, though MND yesterday announced a new sale condition: banning strata subdivision of office space for the future project on the site. This is in line with the vision for quality office developments within Marina Bay, Singapore’s key financial and business district.